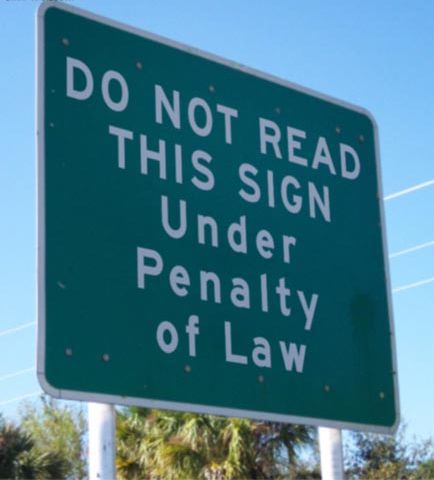 The law of common sense

There are some great laws around the world. China has a state ban on films or TV programmes depicting time travel because they “treat serious history in a frivolous way”. It is illegal to wear armour in parliament in Britain and all males over the age of 14 must carry out two hours a day of longbow practice. In Australia children may not purchase cigarettes but they can smoke them. It is also illegal to wear hot pink pants after midday Sunday. In the US it is illegal to wear a fake moustache that causes laughter in church, boogers may not be flicked into the wind and (luckily) it is illegal for a driver to be blindfolded while operating a vehicle.

Apparently there is a law in Texas that says when two trains meet each other at a railroad crossing, each shall come to a full stop, and neither shall proceed until the other has gone. Not sure how that law is enforced, practically speaking. Same goes for the new law that Bolivia has recently passed granting the planet legal rights, a Bill of Rights for Mother Earth that grants nature the same rights and liberties as human beings and treats resources as blessings. It is a great idea, a great story, but isn’t it already governments role to do this, with or without a law? How exactly are they going to do that?

The most powerful law of our times is Murphy’s law, that anything that can go wrong will go wrong, and for that reason we need laws to protect everything. That is the challenge because even with rules people often do the minimum. New York had a law that said that new office buildings had to put in parks around new developments. Builders proceeded to just put in a concrete area next to the building until individuals within City Hall reworked and reworked the law specifying EXACTLY what they meant by park (i.e. it has to have grass, trees and a certain number of park benches).

Whatever happened to the law of common sense? That if we destroy the world around us we won’t have a world to live in.